Learn About the American Rescue Plan and FQHC Funding.

COPD is the fourth leading cause of death in the United States.

It is characterized by difficulty breathing, coughing, and wheezing, as well as the production of mucus.

This is because the air sacs of your lungs (alveoli) are no longer functioning in cooperation with your airways and capillaries, and therefore you are not getting enough oxygen or expelling enough CO2.

Currently, 16 million people are diagnosed with COPD. But many people may have the disease and not even know it. That is because this disease develops slowly. As symptoms worsen, the disease may begin to hinder regular activity (including walking or taking care of yourself) and become a disability.

In the United States, COPD includes two main conditions: emphysema and chronic bronchitis. Most people have both, deeming it more accurate to simply diagnose individuals with COPD.

In emphysema, the walls between the air sacs are damaged. As a result, the air sacs lose their shape and become floppy. This can lead to fewer and larger air sacs instead of many tiny ones. If this happens, it compromises the amount of gas exchange (oxygen to CO2) in the lungs. In chronic bronchitis, the lining of the airways is thick and inflamed. Mucus forms, making it hard to breathe.

COPD mostly develops in older adults. Those diagnosed are typically at least 40 years old when symptoms begin. However, smoking is the greatest risk factor for COPD. 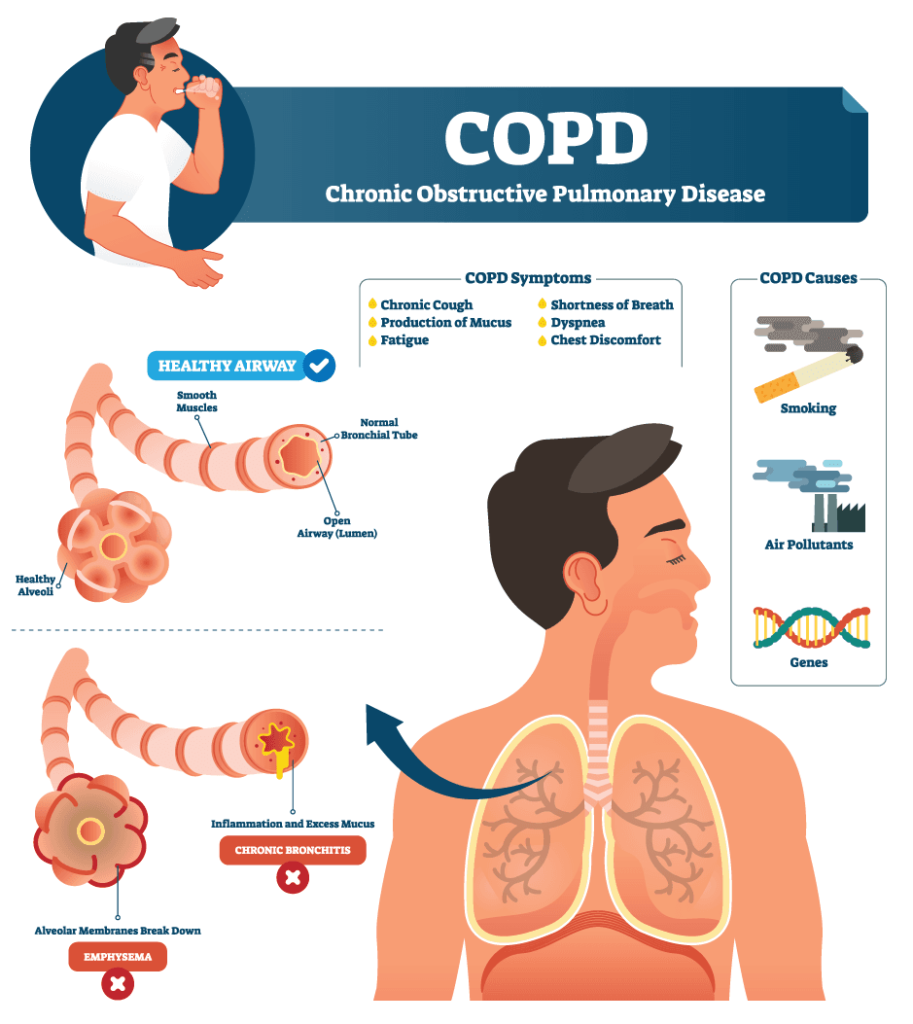 Long-term exposure to lung irritants causes COPD. The most common irritant is cigarette smoke. Others include air pollution, chemical fumes, and dust particles.

Some people who have asthma can develop COPD. However, those with asthma may be more responsive to treatment.

What Are Symptoms of COPD?

COPD begins with mild symptoms, such as a slight wheezing or mild cough. It is often difficult to detect as a serious medical issue until symptoms progress. Those symptoms might include a chronic cough, a mucus-filled cough (aka, smoker’s cough), shortness of breath, and chest tightness. These signs will be especially noticeable during light activity that previously did not cause such symptoms.

Hospital care, including emergency care, might be necessary if symptoms progress to the point of:

How Do Doctors Test for COPD?

To determine if you have COPD, a doctor will perform a pulmonary function test. These measure your breathing: how much you can breathe, how fast you can breathe, and how well you are processing oxygen while breathing.

The primary pulmonary function test is spirometry. This test involves breathing as hard as you can into a tube that is attached to a machine called a spirometer. You might repeat this test after taking medicine to gauge the medicine’s efficacy at improving your airways. Taking this test over time can also help track how the disease is progressing. It can also help confirm whether or not you do in fact have COPD.

In addition to a pulmonary function test, your doctor will likely take a CT scan of your chest. This will reflect the potential damage to the structure of your lungs and depict any visible signs of COPD.

You may also be asked to do an arterial blood gas test to measure the level of oxygen in your blood. For this test, a blood sample is taken from your artery. The results can help determine if you need oxygen therapy. 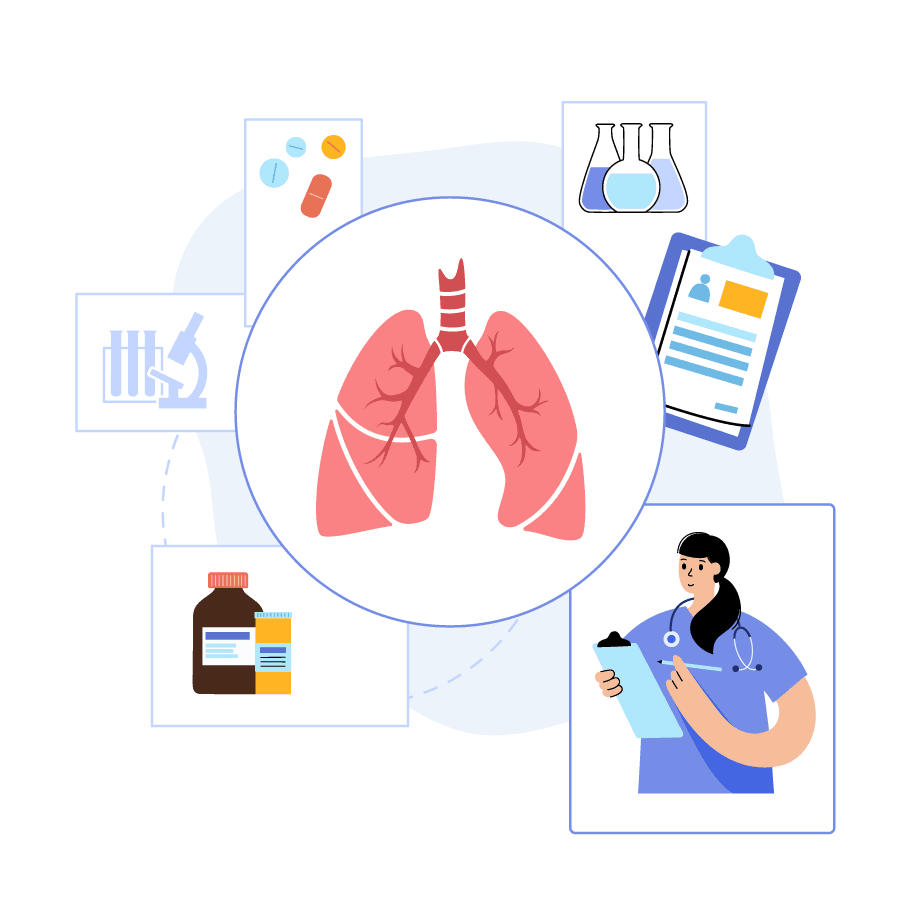 How Is COPD Treated?

There is no cure for COPD. Individuals seeking treatment are typically looking for ways to live more comfortably, avoid complications, and prolong life.

The first step toward achieving those goals is to quit smoking. You may want to consider joining a support group. Your friends and family may provide support, but hospitals, workplaces, and community groups often provide formal classes to help people quit smoking. You will also want to avoid other smokers and all secondhand smoke.

As the disease progresses, you may have trouble eating. You should pursue a nutritional guide that might involve tips such as eating smaller (more frequent) meals, resting while eating, and taking vitamins or supplements.

As your physical activity decreases, you might also want to work with your doctor or specialists to determine which activities are safe to continue pursuing in order to stay as healthy as possible and retain muscle strength.

There are several medications and tools that you can explore, as well, including:

Bronchodilators are prescription medications that relax the muscles around your airways.

They are used through an inhaler. This can make breathing easier for a short time (4-6 hours, as needed) or long-term (about 12 hours daily) depending on what your doctor prescribes.

Steroids can be used to reduce airway inflammation. You would be prescribed inhaled steroids, but this would likely be an addendum to another therapy, such as a bronchodilator. You may be prescribed this combination for a trial period (such as six weeks) to see if it is helping before committing to the regimen.

Pulmonary rehabilitation might include an exercise regimen, psychological therapy, nutritional guidance, and other health management counseling. It relieves the burden of managing the disease on your own. Your team might include friends and family members in addition to your doctors and health care team, as well as any pulmonary specialists, dietitians, and professionals recommended for your individual needs.

Oxygen therapy involves wearing a mask or a set of nasal prongs to deliver pure oxygen directly to your airways as often as necessary. Depending on the severity and progression of the disease, this might be needed when undertaking activities or for a majority of the day.

Oxygen therapy can protect the heart and minimize strain. It can improve alertness during the day and help individuals sleep through the night.

For more information about WITHmyDOC or to get started today, please fill out one of the forms below and we will be in touch right away or call us at 786.621.2910.